Somebody once told me that, when I get onto the academic stage, I look like a chameleon on a Smarties box. The reason for this is that, unlike most people who complete the full academic gauntlet in one discipline, mine spreads across four fields. The same can be said of my professional experience. Historically, I would have remarked that such a vocational approach looked like a schizophrenic career path; however, from a quaternary educational paradigm, it seems that this will become part of the new normal (see https://www.linkedin.com/pulse/quaternary-education-redefining-cornerstone-within-4-hattingh-ph-d-/).

As a result, responding to the common braaivleis vuur (BBQ fire) question, “So, what do you do for a living?”, usually creates more confusion than clarity. Therefore, what exactly does it mean when I say that I am a Human Capital Consultant? Let me perhaps begin with what it’s not.

Exploring a Human Capital View of an Organisation

So, what exactly do we as Human Capital Consultants do? As the term indicates, it deals with a form of capital within an organisation. But what is capital? According to the Merriam-Webster dictionary, the term is derived from the Latin word capitalis (origin caput), which means “relating to the head.”  A common use of the word includes the capital city of a nation or committing a capital offence. Within the organisational context, capital is that which determines the wealth of an organisation.

As it relates to the head, leadership is ultimately responsible for all capital within an organisation. Therefore, the focus of the human capital consultant is seldom set on any other group of individuals, except the business owners and their appointed custodians. Without exception, any environment where I have not directly worked with the CEO/MD/GM of the company has led to continuous delays and certain frustration.

Working with the custodians of an organisation, presupposes a significant degree of strategic engagement, meaning that our work seldomly becomes operational. Rather, one of the key outcomes of the consulting process is that the leaders can translate their strategy into operational execution. This must be done without becoming dependent on the consultant. Alternatively, this is perhaps where the contractor could play a vital role.

As noted, the wealth of an organisation is determined by its collective capital. However, very seldomly do we see any trace of the human component on the balance sheet. A probable part of the problem might be with the fact that we often struggle to understand its monetary value. Raymond Noe indicated that the human capital component can contribute up to 35% of a company’s overall value. I am always fascinated by the responses I get when asking an executive team about their capital investment strategy. Most of the time, the investment process of monetary-related capital has been well devised, but more often this is not the case with the human capital strategy. In numerous engagements, I have felt very sorry for the unfortunate HR manager when everybody looks at them as though they should have a response to the question.

The Motive Behind Human Capital Investment

Very early on in my professional career, I fell in love with the concept of sustainability and the enduring potential of people and organisations. Whether it is a thousand-year-old nation, a hundred-year-old organisation, or merely the succession of a next generational leader, there has always been an intriguing quality concerning this phenomenon. So what constitutes sustainability, especially when considering it from a human capital point of view? This can best be described by the CCI Professional 4S-Model on Sustainable Human Capital Investment:

A significant number of companies currently find themselves in the S1 position. Whether it’s the turbulence of the market or dislocation from the environment, many people are either jumping the corporate ship or have lost their jobs. A seemingly lucrative endeavour for many of these individuals is to explore the entrepreneurial alternative of a Start-up. Likewise, many business owners simply feel Stuck in their current position, while others are just in Survival mode. Maslow’s Hierarchy of Human Needs points out the prioritised requirements of most people. Similarly, if the organisation does not first move to a place of Success (S2), little else will matter to them. This position of Success centres around an empowering economic engine, which enables the company to effectively execute its mandate.

The challenge is that many leaders assume that because they are successful they automatically qualify for sustainability. Unfortunately, this is far from the truth as several additional variables should be considered when successfully transitioning the organisation from one generation to the next.  Research supports the fact that you first need to transition from Success to Significance (S3) to achieve this outcome. In light of the 4S-Model, Significance is the position from where the organisation can optimally fulfill its purpose and mission, beyond merely maximising shareholder value. Only from a position of Significance can the company make the final transition to Suitability (S4).

To the question of how one can achieve this outcome, the answer is straight forward: only through an effective human capital investment strategy. The reason for this is that human capital is not a pool of wealth, it is the foundation on which all other capital pools are built. Just ask any successful entrepreneur!  As future-fit leaders, we must learn how to optimise this foundation.

From a human capital perspective, any organisation can be divided into two functions – strategic and operational. We often explain this through the question, “are you working ON your company or working IN your company?” The strategic function has two domains, that of Governors and Executives. Similarly, the operational function comprises of Management and Employees. As human capital consultants, it is of the essence that we keep the entire structure in mind, yet our focus remains predominantly on the strategic components.

In turn, the COO function translates the strategy into operational outcomes for the management team members. Their focus is to continuously define Best Practices and Coordinate employee performance. Finally, the employees can be grouped into those who Hunt (quantity), Gather (quality) and Craft (capacity). The hunting function has to do with anybody who generates work (such as sales and marketing), gathering function with executing the work (such as production and project management), and craftsmen with capacitating the rest of the company to best do their work (such as administrators and IT support).

Apart from the strategic focus described, the human capital consultant has two additional critical areas of engagement. The first is to support all members to prioritise their highest level of function. I often find myself in board meetings that are occupied by executive conversation, Excos that functions like Mancos, and managers who are doing their employees’ work. The second aspect is the motive of why the model was designed in the form of an hourglass perspective. In many environments, there seems to be a major challenge with translating strategy into operations and in return receive adequate real-time feedback to evaluate the strategy.

Imagine for a moment that your business’ monetary capital only yielded a 50% return on investment or that you only tapped into half of your natural capital resources available. The responsible person would most probably be fired on the spot. Yet, when it comes to the human capital strategy, this sub-optimal investment mind-set seems to be tolerated quite often. The result of such an approach is the long term subsidisation of employees, rather than gaining a sustainable RoI. If this seems vaguely familiar to you, then I have good news.  It is possible to craft an optimised human capital investment strategy for your business! Geoffrey Bellman best describe this partnership as follows:

“Consultants help their clients narrow the gap between what the clients now have and what the clients want or need. Clients choose to be client; consultants cannot decide for them. Consultants decide which clients they will work with; clients cannot decide for them. Successful consultants choose to work with clients who choose them. The underlying power dynamic affects much of what happens between the two from the moment they start working together.”

This article is the first in a four-part series on Human Capital Investment. The series is intended to provide literacy and frameworks of thinking for our target audience in understanding the dynamics of how to become superior human capital investors. For more information, please contact the author, Dr. Marcel Hattingh, at marcel.hattingh@cci.ac.za / +27 (0)83 608 7139, or any of CCI Professional’s consultant team members. Additional references include: 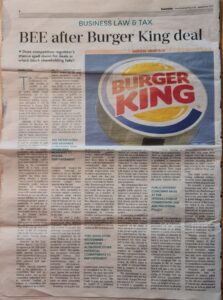 The specific decision making process used by the authorities and especially the way in which decisions were made, will change

At Arbor Capital, we employ a hands-on approach and work very closely with, if not on behalf of, our clients to achieve the desired outcomes in an effective and efficient manner. Our activities and processes are focused on achieving the pre-agreed outcome quickly and economically.